About Dubovica - the most beautiful beach on Hvar 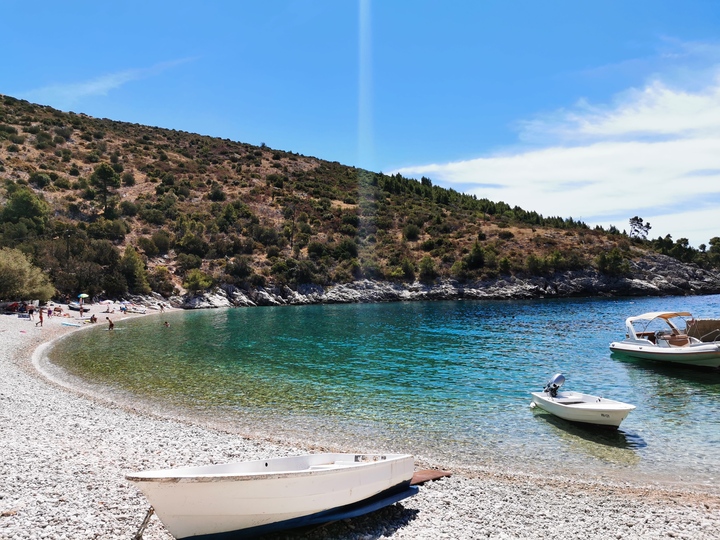 When an island is famous for being sunny, it needs to have spectacular beaches. There are many beaches on this island that will leave you speechless. Some are within walking distance from Oxa Dreamland. However, one is better than the rest. Dubovica is the most famous and beautiful beach on Hvar.

This article reveals everything you need to know about it. You’ll be able to go there ready and avoid most surprises.

Still, you won’t be able to avoid one surprise.

No matter how many photos you see, nothing compares to being on that beach. The first time you get there…ah…goosebumps. Warm pebbles, the smell of the sea, the mighty hills. That stays with you forever. But, Dubovica isn’t for everybody. We’ll start with that.

Who is Dubovica for? (And who shouldn’t go there)

Dubovica is one of Hvar’s gems, but some people should think twice before going there. The trail from the main road to the beach isn’t perfect (more about that later). It means elderly people who don’t trust their legs should pick another way to reach the beach.

The same goes for anyone with decreased mobility. Don’t be sad if you fit into that category. It’s still possible to enjoy Dubovica. All you have to do is get there with a boat from Hvar, Milna, or Sveta Nedjelja. But anyone ready for 10 minutes of walking gets rewarded for the effort. When you know what to expect, and this article will reveal all secrets, Dubovica can’t disappoint.

It’s great for families because kids can play in the shallow sea.

Couples love it because it lets them feel like they’re alone with nature regardless of how many people are around.

People seeking peace find it at Dubovica because it’s far from a party beach. Usually, the only music comes from the old stone house. It’s always classical. You may not be a fan of classical music but combined with the sounds of the sea, it’s the ultimate combination for relaxation. Add a good book and a cold drink into the mix, and you’ll feel your body and soul healing.

Where exactly is Dubovica beach? Now you know it’s worth a visit, it’s time to start planning how to get there. The exact location of Dubovica is 43°08'45.3"N, 16°32'04.8"E. You may fall in love with this beach so much that you tattoo its coordinates. But there is other useful location info about the most beautiful beach on Hvar island.

Note that all distances are from bus stations or town centers. Also, there’s another road from Sveta Nedjelja to Dubovica. It’s much shorter than going around (through the tunnel in Pitve), but it’s macadam, so don’t go there in a rented car.

Dubovica is on the west of Hvar island, much closer to Hvar than Sućuraj. Although it takes more than an hour from the eastern tip of the island to Dubovica, it’s worth it. Combine that with the visit to Hvar town and Stari Grad, and you get a nice full-day trip. However, most people who visit this beach stay somewhere around the famous towns - Hvar, Stari Grad, and Jelsa.

How to get from Hvar to Dubovica beach?

The best way to get to Dubovica is by car because it gives you the freedom to come and go at will. If you’re coming for a day trip from Split to Hvar, it’s simpler to go by bus or taxi.

You may think that renting a scooter is a good idea because it’s less than 10 km, but the road from Hvar to Dubovica is full of curves and hills. Getting there with a scooter takes a lot more than 12 minutes. In July and August, when the temperatures are over 35°C, riding a scooter on that road is torture. Don’t do that to yourself. Another option of reaching Dubovica from Hvar is to book a boat tour.

How to get from Stari Grad to Dubovica beach?

Getting from Stari Grad to Dubovica by boat is possible, but it takes too much time, so stick to a car or a bus. There aren’t as many taxis in Stari Grad as in Hvar, but there are enough bus lines to organize a trip to the beach if you don’t have a car. You can always hitchhike; it shouldn’t be too difficult if you do it from the ferry port.

Is the trail from the road to the beach really that bad?

Unless you get there by boat, you’ll have to walk from the main road to the beach. There are two trails, but I recommend you to go with the one starting near the bus station. It’s steeper than the other one, but it’s much closer, and the view is better. And no, the trail is not that bad. If you aren’t used to walking on the rocks, wear closed shoes, but I’ve seen people walk there barefoot. It takes 10 minutes from the road to Dubovica and 15 minutes on the way back because it’s uphill.

Now you know where Dubovica is and how to reach it. Still, there’s more to learn if you want to be ready and avoid all unpleasant surprises.

Don’t go to Dubovica without water and something to eat. Yes, you can eat in the restaurant and get a drink in a bar, but better safe than sorry. If you aren’t a fan of pebbles, bring a yoga mat, so you can sunbathe comfortably. A hat and an umbrella come in handy too.

If you get to Dubovica on time, you can leave your car on the road widenings near bus stations. Just make sure you don’t block the spot for a bus because you may get fined. If you aren’t lucky, you’ll leave your car on widenings towards Zaraće. That will prolong your walk for 5-10 minutes. If you’re really unlucky, you’ll park where the macadam road for Sveta Nedjelja starts. That will add at least 10 minutes to the walk and make you hate gravity on your way back. Luckily, the beach is never that crowded.

What’s the best time of the day to visit Dubovica?

Early birds love Dubovica because most people don’t get there before 10 o’clock. All the best parking spots are available early in the morning too. Depending on the time of the year, the sea can be a bit cold that early, but being almost alone on such a beach is worth it. The second best time of the day to visit Dubovica is in the late afternoon. After most people leave, the beach becomes romantic and shows its full power.

Tour boats get to Dubovica around 10:30, so if you aren’t a morning person, go there after 12 o’clock. Don’t forget to bring an umbrella, hat, and suncream, especially in July and August. 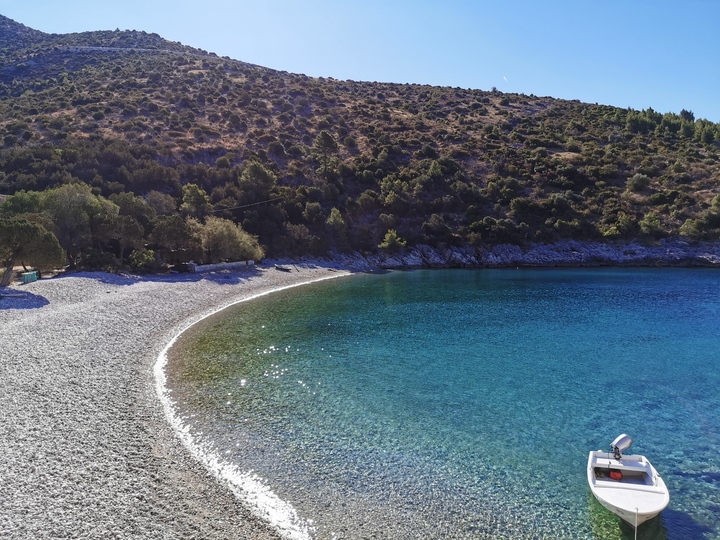 Is there a public shower and toilet?

No, there are no public showers or toilets on Dubovica. You can use a restroom in a bar and a restaurant (not free). The lack of showers shouldn’t be an issue because the sea is crystal clear. But if you can’t stand the salt on your skin, bring a bottle of water to wash it away.

Is there enough shade on Dubovica beach?

Dubovica doesn’t have much natural shade because there aren’t many trees. The best option is to bring an umbrella (parasol). You can hide from the sun in the bar or restaurant too.

Can you rent a sunbed on Dubovica beach?

There are no sunbeds for rent on Dubovica. For some, that’s a downside, but it’s better that way. The beach covered in sunbeds loses its charm. The main reason for visiting this beautiful place is to enjoy its energy. Bring a yoga mat if you aren’t into pebbles. It will make you comfortable without ruining the unique aura the beach has.

Spending a couple of hours at Dubovica is something everyone visiting Hvar should do. It’s just 20 minutes away from Oxa Dreamland. If you wish, you can spend time there every day. But you won’t desire to leave the ultimate privacy Oxa Dreamland provides that often.